The people don’t know I am photographing them. They are many. Some look, then look around, as if wondering what I am hoping for. A handful of grains. A suggestion of identity to offer up.

The work is featured in Laissez Faire magazine, from which the following words are taken:

“At the other end of the spectrum, there’s Andrew Chisholm. His set, Unknown Persons, is one of the most disturbingly interesting explorations of the limits and uses of photography probably ever displayed. “The people don’t know I am photographing them.” That’s how Chisholm’s catalogue description begins. The associated images are grainy, distorted snapshots of unidentifiable people. Looking at them there is a voyeuristic intrigue, you’re judging an image that you feel you were never meant to see. Nobody sat for a painting, no model was paid for a photoshoot. The photographs that make up Unknown Persons almost feel illegal until you realise how artificial they are. The distortions aren’t caused by movement or a strained long distance lens, they’re the result of development techniques. Each image is pushed just past the point where the subject might be recognisable. What’s left are spots of colour that feel like Pointillism: an abstraction that lets you pour meaning into the image. Just as Boulton’s photograph of a photograph asks us to question the reality behind images we see, Chisholm’s work encourages us to look at our own input in making photography what it is.” 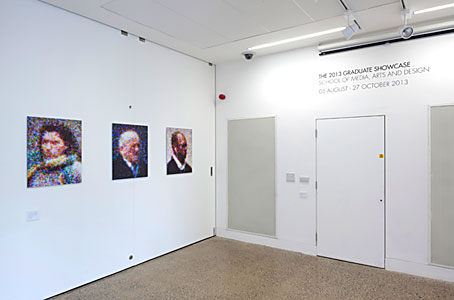