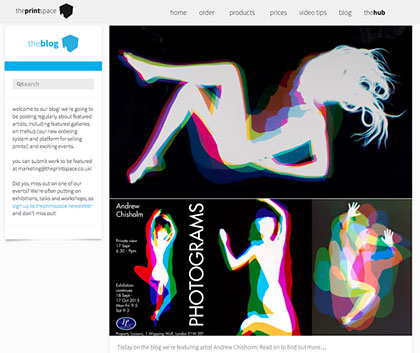 The Printspace featured me on their blog:

Please introduce yourself: who are you, where are you based and what do you do?

My name is Andrew Chisholm, and I’m based in Nunhead, south-east London. For the last couple of years, I’ve mainly been working without a camera, making photograms directly onto light-sensitive paper.

How did you get into photography and making photograms?

My father used a camera for his work sometimes, so photography was around and I was interested. Then one Christmas when I was nine or ten, my favourite uncle gave me a darkroom kit. These objects seemed ancient, exotic, difficult. The developing tank was made of bakelite. The enlarger lacked a negative carrier. The half box of 5×7 paper that came with it was so ancient it was barely light-sensitive any more. I have no idea where he found this stuff. I made a crude replacement for the carrier and slowly started to puzzle out how to make these things actually work. Once I finally got a decent image, that was it!

I always dabbled with photograms, but the current focus on that technique comes straight from visiting the Shadow Catchers exhibition at the V&A in 2010. Seeing the work of Susan Derges and Floris Neususs in particular, I very much wanted to explore what could be done along related lines, but using colour, or using it more fully.

Please give us some background information about your project.

Neususs developed his Korperbilder series over decades, exploring many different ideas. Starting from Neususs’ basic proposition of posing a model on photographic paper, I experimented with several differently-coloured lights. I quickly found that these images had to work rather differently from those made by Neususs.

We’re accustomed to the truth claims of photography and we’re also accustomed to photography that has only one point of view. By this I don’t mean that the meaning is unambiguous, but that generally the lens provides a unique physical point from which the scene is viewed.

Photograms make some of the same truth claims but deny access to any surface detail. A photogram has a ‘point of view’ in that the shadow thrown onto the paper is invisible from the light source itself. If there are several light sources, you then have several points of view represented simultaneously. If the light sources are of several colours, then the accounts they leave of the outline of the person literally colour one another.

So the images are intended to work at an aesthetic level, but also to disturb the photographic idea of being able to catch an image and thereby know something objective.

Most recently, Against Photography at Scheublein + Bak. In researching Neususs’ work, I’d read some of Gottfried Jager’s theoretical texts, and through that I was aware of various artists making ‘concrete’ and abstract work in the latter half of last century. The gallery has assembled a large body of images by 13 artists working in this area, most of which was new to me. I think all photographic work suffers from appearing on a screen instead of a wall, and particularly so with cameraless work, where there can be so much very fine detail. Discovering so much work done in this area, several artists new to me and actually seeing these images on the wall was exhilarating.

Much of the work was made using equipment that the artists devised themselves. I’ve felt like a bit of a geek about making my own electronics and modifying commercially available equipment, but the experience of seeing the show and learning more about the methods they used makes me determined to develop that aspect of my practice further.

The private view of the next show is Thursday 17 September at 1 Wapping Wall, E1W 3ST. This is courtesy of Property Liaisons, an estate agency, which has started a programme to support local and emerging artists by making their office space available for exhibitions. They’ve kindly given me my first solo show, which will feature figurative photograms and photograms of water waves made over the last two years .

What’s your next step? Have you got any new projects on the horizon?

I’ve just completed making a ‘light synthesiser’, which enables me to make light of any hue and saturation. Up to now, I’ve been using red, green and blue lights only, but this throws things wide open. So I plan to continue experimenting with the new possibilities that offers. As well as the figurative photograms, this seems to lend itself to more abstract work, so I’m thinking about some of the ideas from Against Photography and how they might be reinterpreted in colour.’